Khandwa, located in Central India, is a city in the State of Madhya Pradesh. Khandwa means “Khandav Forests” which is derived from Khandav-Van . Bestowed with a rich culture & tradition Khandwa has, has many ancient temples, monuments and other attractive places to visit. Khandwa is the main Railway Junction and is thus well connected to major cities like Patna, Allahabad, Lucknow, Jammu, Mumbai, Pune, Delhi, Goa, Cochin, Kolkata, Indore, and Bhopal constantly witnesses a steady in-flow of tourists. Come lets explore the lands of Jungle in detail.


Know Interesting Past of Khandwa 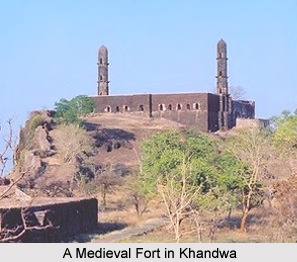 Khandwa in the Nimar region lies in the lower valley of Narmada river and its history datesback to Maratha rulers, who handed it over to Britishers in the year 1818. The region had a rich glorious past as the Mughal Emperor Shah Jahan used it as a base for conquering the Deccan region. After gaining independence in 1947 the Central Province & Berar region became part of Madhya Pradesh State. East Nimar also played an important role during the freedom struggle and the people of the region actively participated in the Quit –India Movement, Non-Co-operation Movement, Civil Disobedience Movement, etc. Revolutionary freedom fighters like Lokmanya Tilak, Haridas Chatterjee, Makhanlal Chaturvedi, Thakur Laxman Singh, Abdul Quadir Siddique and Mahatma Gandhi ji visited the region to motivate the people against the Bristish Rule. The region holds the distinction of being home to great Scholors like Swami Dayanad Saraswati of Arya Samaj Fame, Swami Vivekanand, the founder of Ramkrishna Mission and Saint Singaji, a great poet and saint. Khandwa region also boosts of being the native place of Actor Ashok Kumar and his singer/actor brother Kishore Kumar and Anoop Kumar who were born & brought up here. Saroo Brierley the author of the famous book - A Long Way Home also belongs to this region. So for all the die- hard fans of Ashok Kumar & Kishore Kumar Khandwa is a must visit place. People who are interested in history also come to this palce to explore its intriguing past and be a witness to the struggles of the freedom fighters.

The best time to visit Khandwa is from October to March when the temperature is neither too hot nor too cold. The climate of the District is pleasant and it falls in the drier part of the country. One can get advice before going as to where to stay, eat and the places to visit so that you can have an awesome trip. 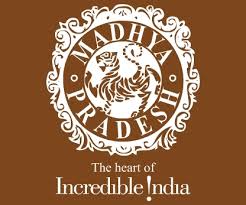 Plan a trip to the ancient city of Khandwa in Madhya Pradesh which has numerous things to offer, provided you have the right guidance. Travellers can explore the various Tourist attractions and thoroughly enjoy the experience of this destination. The ancient kunds in all the four directions called Padam Kund, Bheem Kund, Suraj Kund and Rameshwar Kund, Religious Places like (temples & shrines), buildings constructed in English Architecture Style, Picnic Spots, Dams and Weekend Getaways are all the special features of this city which are not to be missed. Khandwa has its fair share of tourist attractions the most prominent among them being the Ghantaghar, Four Kunds and British monuments. The modern day Khandwa has a few dams like Nagchun Dam & Sagar Dam, which serve as great spots for picnics and weekend getaways. 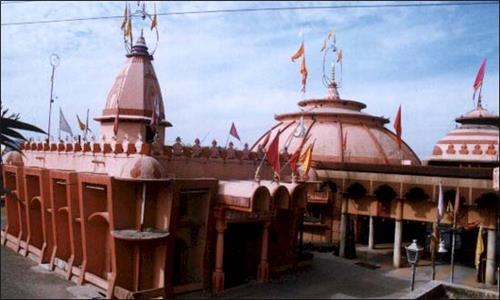 This place marks the holds the Samadhi of famous Avadhoot Hindu Saints Swami Keshwanandaji Maharaj & Swami Hariharanandji Maharaj who were respectfully referred to as "Bare Dadaji" & "Chhote Dadaji" respectively. It is located about 3kms from Railway Station in the South-Western Khandwa region. It is believed that Shree Dadajee Danday Wale was an incarnation of Lord Vishnu and had special healing powers. During the 19th and 20th century he was quiet popular, people had great faith in him and worshiped him unquestionably. The Saint blessed his devotees with a stick, he beated and abused his followers with a stick so as to heal them. Devotees from all over the country throng to this place to attend the famous fair held here at Guru Purnima every year. 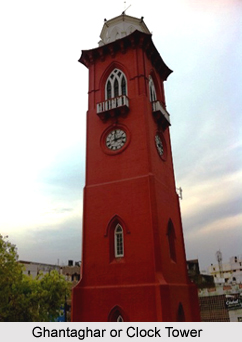 A perfect place for picnics & photogenic views with lush green plantation is the Nagchun Dam. Located near the Nagchun village, about 7 kms from the station it is the perfect place to visit. This Dam provides water to the city and a beautiful view to the visitors. One can visit the place and have all fun at this place which is located away from the hustle and bustle of the city life.

This was an ancient temple with a sacrificial alter to appease Kal Bhairoa, a form of Shiva. Later this practice was ended by the British Rulers. The place is situated on the hillside of Omkareshwar.

The memorial hall was built in the memory of late singer Kishor Kumar Ganguly and now serves as a center for all cultural programs & musical shows. It is situated about 1 km east –ward from the Khandwa station and a must visit place for all the fans of the legendary singer as well as the music lovers.

Omkareshwar is a sacred island, which is in 'Om' shape. This sacred shrine is a unique blend of natures work combined with a man made shrine which is both magnificent and awe-inspiring. As per ancient folklore it is said that when Lord Narad, visited the Vindhya mountains, he was amazed & angry to find that there was no place there suitable for Lord Shiva to reside. The deity of Vindhya mountains subjected himself to severe punishments for this lapse and prayed to Lord Shiva to forgive him. Lord Shiva was so pleased with his devotion that he decided to make Omkareshwar as one of his homes. Comprising of two lofty hills of Vindhya on the North and Satpura on the South with Narmada valley in between the pace appears in the form of the sacred Hindu symbol 'Om' from above.

A cantilever type bridge was constructed in 1979 which enhances the natural beauty of the place and attracts thousands of tourists to the place.A temple is situated at this place and Hindu and Jain devotees throng the temple as it houses one of the twelve Jyothirlingas in India. The temple showcases the beautiful Nagara Style of Architecture with some enchanting frieze carvings on its panels and stone roof structures.

The Shrine of the temple has different kinds of geometrical shapes like circles, polygons, squares, etc. Situated on the Indoor -Khandwa highway about 75 Kms approx from Khandwa on the banks of river Narmada, it is a divine temple. Siddhawar Kut for Jains and Mamaleshwar for the Hindus are located here, thus attracting hundreds of pilgrims from both religions as well as foreigners to this place every year. Besides this the caves of Adi Guru Shankaracharya who was the renowned saint of Advait Philosophy of Hindu religion is present in this region. 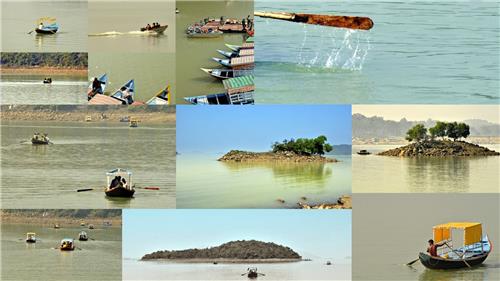 The Indira Sagar Project by the Narmada Valley Development Authority is the main location on the banks of river Narmada. It is well connected by roadways around 61 kms from Khandwa District HQ and Khandwa and Bir Railway Stations through Central Railway line of Mumbai –Delhi. Local people as well as tourists coming from outside visit this place to enjoy the scenic beauty, gushing water and greenery spread all around.

This District Collectorate Building is a unique blend of the traditional & modern history. Built in 1919 in the Eastern Part of the town, it is well preserved and a beautifully designed structure of English architectural style. Earlier it was constructed in 100mts x 50 Mts. area but later many extensions were later done by the Collector and District Magistrate. Sincere efforts have been made to preserve this well arranged building and beautify it with dense tree plantations. Counted as one of the major attractions of Khandwa it now also serves as the Office of the Collector of Khandwa.

This Magnificent temple of Goddess Maa Turja Bhavani is believed to have been visited by Lord Rama during his 14 years exile. Lord Rama worshipped the Goddess Shakti for 9 days in this temple only making it a historical place. Located close to Dadaji Darbar it is an important place of worship for the Hindus, who visit this temple to pay homage to the Goddess and seek her blessings. During the pious occasion of Navratras a 9 day festival is held here and devotees visit this temple for worship and offering prayers.

The devotees of Shakti visit this temple which is dedicated to Goddess Nav Chandi. Situated in the LavKush Nagar, in the northern part of Khandwa, it is approx. 4 Km from the Station. Every year during the months of Falgoon (Feb-March) a fair having cultural & religious program is organized by Baba Gangaram, an ardent devotee of the Goddess and had essayed a major role in the construction of the temple. Many famous personalities of the region & hundreds of devotees attend the fair which has now become an important event for Khandwa city.


How to reach Khandwa ? 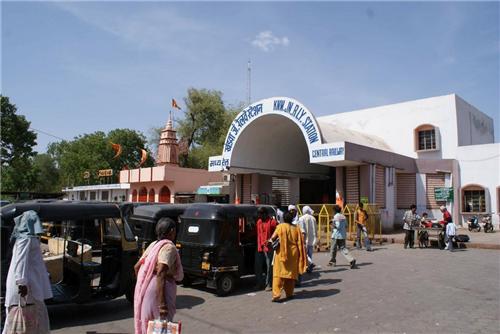 Khandwa is well connected with a network of roads & railways. A number of rail routes and highways connect the city with other cities in the country, and the road network covers nearly 2328.45 Kms. Khandwa holds the pride of being the busiest railway junction lying on Delhi –Mumbai Central Line connecting all the Northern, Eastern, Southern & Western Rail Routes of India, thus making it easily accessible through train. Khandwa is situated on main Malwa Train Line which connects Indore with the Deccan and further meets the Main East-West Line from Mumbai to Kolkata. An airstrip is located on Nagchun Road near to Khandwa but there are not many aircraft landing or flying from here. The other nearest airports are Bhopal and Devi Ahilyabai Holkar International Airport, Indore, from where flights are available to all parts of the country. One can opt for local means of transport like Auto rickshaws, buses and cycle rickshaws to travel within the city.


Where to Stay in Khandwa ?

A number of budget, economy, mid-range and luxury hotels and guest houses are present in Khandwa to make your stay comfortable. One can opt for the same as per the budget and requirement. These hotels & guest houses offer all basic amenities along with quality room service for your convenience. It is always advisable to consult your travel advisor or book a room at a registered hotel only keeping the safety aspect in mind. During the holiday or festive season it is better to book in advance to avoid the last moment rush.


Where to Shop in Khandwa ?

A holiday trip is never complete without a shopping spree, a visitor coming to the city wants to take souvenirs and gifts back for friends & family. Khandwa also has a number of markets where one can shop to heart’s delight. Unique handicraft like Jute Zari, Bamboo & Cane Work and Wooden Carvings are things one can buy from the shops in Khandwa. Bombay Bazaar, Sarafa Bazaar and Budhwara Bazaar are the main markets of Khandwa, where hundreds of shoppers flock all the year around.

So plan a trip to the intriguing city of Khandwa and explore the religious & historical places of importance the city has to offer. From the ancient kunds spread in all the four directions to the Religious Places, visitors coming to the city have much to see. Visit the buildings in Khandwa which had been constructed in English Architectural and also get a glimpse of an era gone by. The availability of adequate transportation facilities, budget accommodation and the warm hospitality of the people will surely make your stay both comfortable & enjoyable in Khandwa city of MP.