Khandwa which is part of the Nimar region has lots of historical accounts to narrate. Situated in the valleys of River Narmada, Kherkhali , Choti Tawa & Shiva it derives its name from the Khandav forests found in this region. It is surrounded by Narmada in North, Satpura Range & Burhanpur district in the South. Khandwa lies in the Basin of Tapti River. The Fortress of Asirgarh commands the pass popularly known as “Key to Deccan “which forms the main route connecting the Northern & Southern India including Khandwa , Burhanpur and Satpura. Legendary actor and singers like Ashok Kumar & Kishore Kumar belonged to Khandwa. Other famous personalities like Bhagmantrao Mandloi, Chief Minister of Madhya Pradesh, the great Hindi Poet Pandit Makhanlal Chaturvedi & Saint Singaji are a native of this place. Saint Singaji has large following and a fair is held every year on Sharad Purnima at his Samadhi place Piplia Singaji.

Omkar Mandhata is a rocky island about 47 miles north-west of Khandwa on the river Narmada was conquered by Haihaya King Mahishmant. It is said that Lord Shri Ram visited Khandwa during “Vanvas” along with Mata Sita and brother Laxman. He causterized an arrow and drew water which became a well and from then it is said that the well never went dry. Many tributaries of Narmada have been found with the traces of Paleolithic men in East Nimar district which was included in the Avanti kingdom during the rise of Buddhism. Later it was passed on to various other kingdoms under different rulers as Magadha by Shishunaga, Mauryas, Sungas, Early Satvahanas, Abhiras, Vakatakas, Imperial Guptas, Kalchuris, Vardhanas under Harsha Vardhana, Rashtrakutas, Faruki Dynasty, etc.

Burhanpur to the South of Khandwa has an important story to tell during the 1617 A.D. During this period prince Khurram was the Governor of the Deccan and was bestowed by the title of Shah by Jahangir and later Shah Jahan on 12 Oct 1617 AD following a peaceful victory. Shahjahan ascended the throne after the death of Jahangir in 1627, when there was an advent of trouble in Decean. Shahjahan stayed at Burhanpur Balapur fort for a couple of years following the birth of his fourteenth child and led a few military operations against Ahmadnagar, Golkunda and Byapur. Mumtaz Mahal , the favourite queen of Shahjahan died on 7th June 1631 at Burhanpur. Shahjahan sad & alone left Burhanpur appointing Mahabat Khan as the Viceroy of Deccan on 6th March 1632 taking away the remains of the body of Mumtaz Mahal to Agra (who was earlier buried in garden of Zainabad across river Tapti). 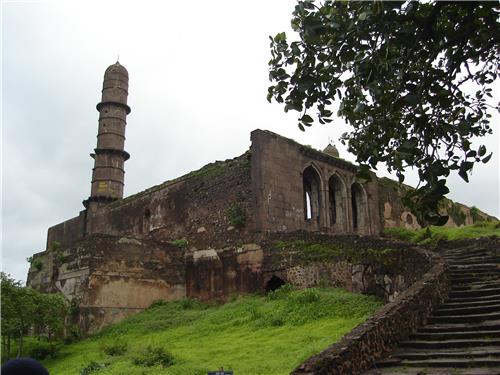 From 16th Century to 18th Century Khandwa was under the Mughal rule and in the mid-18th Century, the region came under British rule. The Marathas had to surrender Khandwa to Britishers in the year 1818. Then happened the armed rebellion of 1857. Tantya Tope passed through East Nimar district burning all the government buildings & police stations in this freedom struggle of 1857. B ut unfortunately the rebellion was crushed only to see the advent of new era within hundred years.

During 18th Century to 15th August 1947, East Nimar district played an important role in Non-Co-operation, Civil Disobedience & Quit India Movement to gain Independence from the Britishers. Many renowned freedom fighters like Swami Dayanand Saraswati, Sawami Vivekanand & Lokmanya Tilak. Mahatmi Gandhi came to the region in 1921 and was honoured with a “Manpatar”. Haridas Chatterjee, Makhanlal Chatturvedi ,Thakur Laxman Singh & Abdul Qadir Siddiqui some of the young freedom fighters of Nimar region attended the Calcutta session of Congress in 1917. During the Non-Co-Operative Movement & Civil Disobedience Movement of 1930 the people of the region participated with great enthusiasm & zeal. Local publications which supported the freedom movement and wrote against the British rule were seized and the editors put in jail. , like the editor of Karmavir – Mr. Makhanlal Chaturvedi was sentenced to imprisonment for two years and the Editor of Swarajya – Mr. S.M. Agarkar was also arrested and sent to jail. In the year 1931 a Nav Jawan Sabha was formed in Khandwa to struggle for attaining freedom with students also actively participating in this historic movement. The heroic students Union Jack from the high school building and hoisted the tricolor instead. The British retaliated by arresting Raichand Bhai Nagda in this connection.

The Quit India Movement was also very actively supported by the people of the Khandwa. A political meeting which was held at Harsud during August, 1942 created awareness amongst the people about the Quit India Movement. The Students of a local school - Robertson High School, hoisted Tri-colour on the school building on 15th of August, which was removed by the police. The students led a procession against police protesting against their atrocities. The Local Nagar Nigam & Girl Degree College are historical buildings which were built during the British Rule.

The Central Provinces & Berar became part of the new Indian State of Madhya Pradesh in 1947. Nimar district was the name of Khandwa district before 1956, when the state of Madhya Bharat to west was merged with Madhya Pradesh. Khandwa was earlier known as East Nimar & the Burhanpur district was separated from Khandwa district on 15th August 2003. It is then one of the most backward districts named by Ministry of Panchayati Raj in 2006 and has been receiving funds from BRGF (Backward Regions Grant Fund Programme). Today Khandwa is fast developing into a modern city with rapid infrastructure development, all modern amenities and basic civic facilities. Proper care is being taken by the civic authorities to develop the city while ensuring greenery and ecological balance.